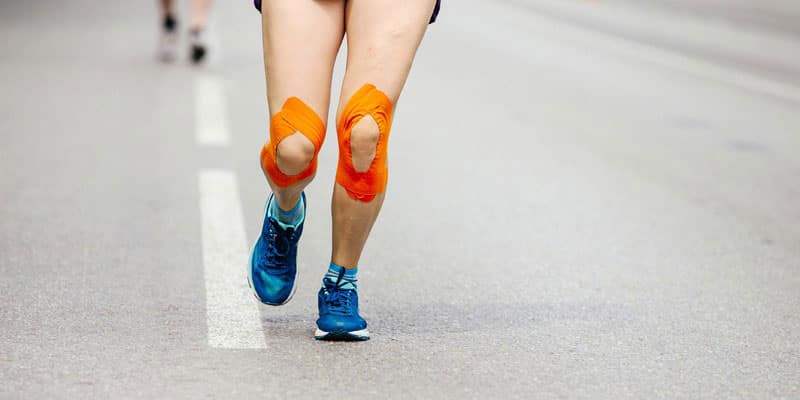 There are a few different types of tape: traditionally we have used tape to support ligaments, tendons and muscles to prevent further injury; also to give compression to a recently injured joint or to limit extremes of movement associated with chronic instability; or finally to enhance joint position sense (proprioception). This has historically been with zinc oxide tape (white tape or beige), which is rigid taping. We get through masses of this tape with the rugby teams! This is useful for ankles, knees, shoulders, fingers and wrists. Unfortunately this tape isn’t waterproof and if you are not using a protective base layer should not be worn over 24 hours otherwise it can irritate the skin.

Since the 2012 Olympics you may have noticed athletes wearing multi-coloured tape called kinesiology tape or kinesio tape. This tape was originally invented by Mr Kenzo Kase in the 70’s and was designed as a second skin but more recently somebody suggested it should be multi-coloured and the craze took off. There are a few theories behind this tape, which is stretchy and has a wave like appearance as well as being aesthetically pleasing.

So is it a fashion or a fix? It’s cheap to use, the risk is pretty much non-existent, it’s waterproof and can be used for between 3-5 days, the evidence is limited, but it may have some short term benefits for pain relief. I have treated many athletes who report an enhanced confidence with taping, which has obvious benefits to performance.

My personal take on it?

I use it for some injuries/conditions for example with acute shoulders for postural feedback, anterior knee pain in order to try and offload the skin to reduce pain and give proprioceptive feedback for the knee cap. I also use KT tape with muscle injuries to improve the blood supply, aid swelling and sometimes neck and lower back pain for sensory feedback. I find it helps reduce initial pain to allow the commencement of some rehabilitation exercises.

Tape has a place in a physiotherapist’s tool box but may not be the quick fix that some people think. It does give sensory feedback from the skin allowing improvements in proprioception. This can be useful when completing rehabilitation, assisting joint feedback or reminding you if you have been in one position for too long (poor posture). For some people tape around the ankle will psychologically improve your confidence and allow return to running, which is great and as strength, balance and control improves, we ideally don’t want you to rely on it forever.