What Can We Learn From The Origins Of Pilates? 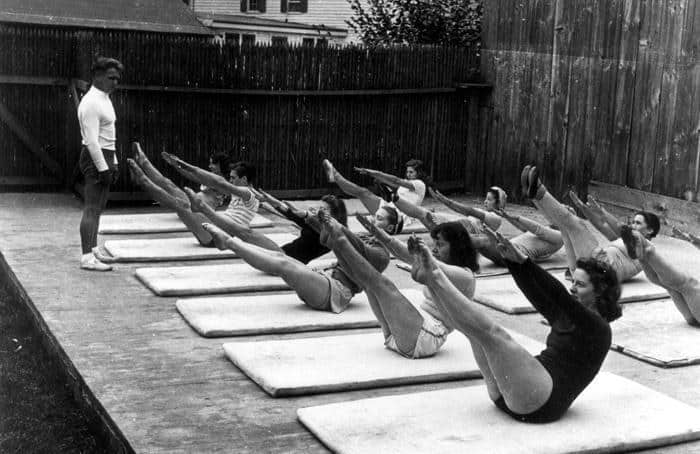 Christmas is approaching… and so are the remaining few pilates classes in 2019. So, as we stiffly endure our 2 week break from Pilates throughout the Christmas period, this blog aims to get you through with some interesting reading about Pilates and the history behind it.

What is Pilates-based exercise?

Pilates is essentially a mind body exercise technique that emphasises the importance of beginning movement from a central core of stability. Joe Pilates (I’ll talk about him later), in his early years, created 34 Pilates movements consisting of strength, mobility and stretching exercises that were completed on a mat. Over time, these original 34 Pilates movements were tailored and developed into graduated levels of movement, which are commonly used today.

As Pilates focus is on movement originating from a stable core, the pilates method works by adjusting the intensity of each pilates movement, by using various limb movements and resistance (pilates equipment) to challenge our core in static and dynamic movements. When this is combined with the appropriate breathing control, the spirit of mind and body exercise becomes apparent.

The overall aims of Pilates is to develop the deep, postural ‘core’ muscles that support the spine throughout movement, enhance normal movement patterns and improve overall body alignment. The final result is the building of a body that is more efficient in daily activities and less prone to future pains and injuries.

Who is Joe Pilates?

Joseph Humbertus Pilates was born in Germany in 1883. During childhood, he was recurrently ill with rickets, asthma and rheumatic fever. Because of this, he was determined to become physically immune to his problems from studying exercise, yoga and meditation. By his teen years, he was very fit, being accomplished in skiing, diving and gymnastics.

In 1912, Joe moved to England where he worked as a boxer, circus performer and trained detectives in self defence. When WW1 broke out, Joe was interned as a POW in Lancaster and later moved to the Isle of Man. While in the Isle of Man, Joe was trained as an assistant in the hospital. Here, he was appalled to see so many ill people in bed doing no exercise, therefore he devised a gentle exercise regime for these patients. Soon it became evident that those completing Joe’s exercises were improving faster. With endorsement from the doctors, Joe progressed his exercises to incorporate the use of resistance via springs from old hospital beds.

After the war, Joe returned to Germany where he continued to develop his exercise regime within the dance world, and his reputation quickly grew. However, this led to him being asked to train the German army, he decided to leave Germany for good and travelled to America by boat where he met his wife, Clara. Together, they opened ‘The Pilates Studio’ in New York. By the 1960’s. they counted world famous stars and ballerinas of the New York Ballet as their clients.

What can we learn from the life of Joe Pilates?

When Joe passed away in 1967, he left no will and had designated no line of succession for his work to carry on. However, even today, his Pilates legacy continues and benefits all aspects of people across the world!

As well as the principles behind his exercise program, what we can also learn from Joseph is that our current pains and injuries do not need to remain indefinitely!

With that in mind, we return to our normal schedule of pilates classes on the 6th January 2020, with our 1st Pilates theme of the year being ‘Got My Back’.

For those of you who can’t fathom 2 weeks without any Pilates, Emily will be teaching extra classes over the Christmas period, so please get in touch with our client care team to book these or use the app.

Have a great Christmas & see you in the New Year!!